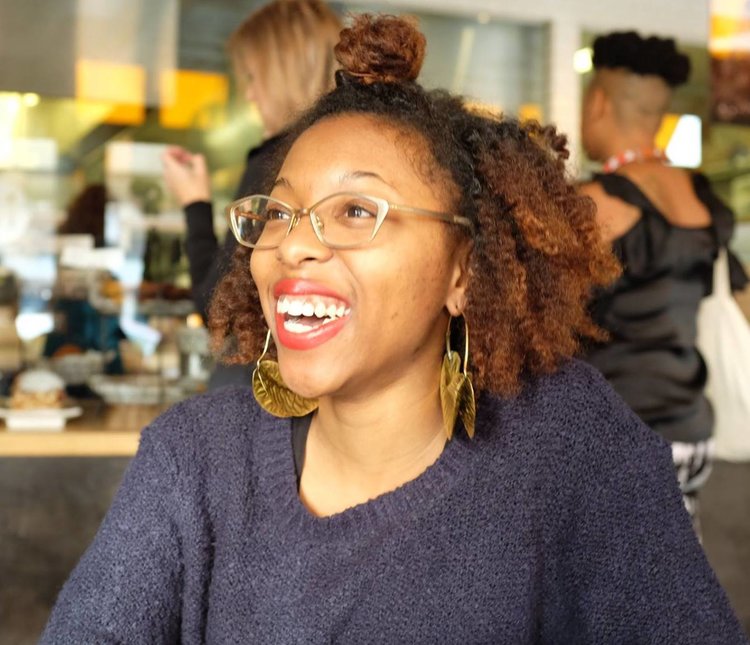 Tell me about yourself.

I’m originally from Tampa, Florida. I came to Chicago to study Interior Architecture at Columbia College Chicago. I was drawn to people like Frank Lloyd Wright, Maya Lin and Zaha Hadid whose work has enormous personality. These people work in unconventional ways, like Maya Lin’s Eleven Minute Line. But when I got to Columbia, I found the program was more focused on interior design than manipulation of space, which was my interest. When I got to my senior year, my advisor Dr. Amy Mooney suggested that I take a curatorial practicum with Neysa Page-Lieberman. I had no prior knowledge of what went into making an exhibition. We visited exhibitions and read curators’ writing. We had the option of producing a show. I decided to create the exhibition How to Make a Hood at the Arts Incubator in Washington Park. I was interested in exploring the stereotypes of Black neighborhood and motherhood among other ideas. I loved doing the work. It allowed me to manipulate space, and I got to learn about what artists are doing. I’ve maintained relationships with many of those artists from that initial exhibition.

Talk a bit about Yelling At The Sky, the show you created for the GDDF Curatorial Fellowship. How did you shape the exhibition?

At first, I didn’t want to create a themed exhibition. To start, I contacted twenty-two visual arts organizations supported by the Foundation, and the work spanned from modern to contemporary. I didn’t see how I could create a theme from such a broad span. But at the same time I was making these visits, I watched a film on Netflix called Yelling to the Sky starring Zoë Kravitz. It’s a coming of age film. I was nearing the end of my studio visits and was at the studio of Robert Burnier, a sculptor who works with aluminum. He showed me some works in progress for his MFA show at the School of the Art Institute. His work had been in black, white or gray to that point, but this work was going into new territory, inspired by the colors he comes into contact with on a daily basis, many of which are in his studio. There was a scrap lying off to the side all tangled in an orange extension cord. It caught my attention, so I asked him about it. He said that he’d manipulated the metal too much and that piece had broken off. Curator Hamza Walker once told me to name an exhibition the first thing that comes to mind. Just name it. So, I’ve sort of been taking that approach, not being afraid of language. When I saw Robert’s piece, I thought it looked like it was yelling at the sky.

What was different about putting this show together?

What’s next for you?

I’ve just accepted the position of Exhibitions and Community Programs Manager at MANA Contemporary Chicago. I’ll be handling all the logistics for exhibitions on the first and fifth floors. I’ll be working with the artists that have studio spaces in MANA to better promote their shows and support them when they have events and programs in the building. And, I’ll be able to curate small exhibitions of emerging Chicago artists, which I’m always excited about.